3D ANIMATION•BRANDING•PRINT
Klint Museum
Summary
‍The feeling of Occult symbols without subscribing to any in particular. Hilma af Klint was very much infliuenced by these symbols as well as a practicing occultist. Hilma and her group called the "five" took part in 100s of seances. She practiced seances, was told by a higher power to paint and when on to continue for 12 years.....

Using an old church in Beacon, NY.
My Role

Summary
‍The Klint Museum soon to be housed inside a 250-year-old Lutheran church in Beacon, NY will display the artist, Hilma Af Klint's collection in its entirety. Hilma Af Klint was a Swedish artist and mystic whose paintings are considered among the first abstract works known in Western art history. A considerable body of her work predates the first purely abstract compositions by Kandinsky and Mondrian.

Klint's work was very much influenced by occult symbols as well as being a practicing occultist. Hilma and her group the "Five" took part in 100s of seances. The Five believed they had been contacted by the “High Masters,” spirits called Amaliel, Ananda, Clemens, Esther, Georg, and Gregor. One of these would give Klint the mission that would become “The Paintings for the Temple,” the multi-part cycle that would occupy most of the Guggenheim's 2019 show. “Amaliel offered me a commission and I immediately replied: yes,” she wrote. “This became the great commission, which I carried out in my life.”

Theosophy, a religion established in the United States during the late 19th century was obsessed with esoteric symbols—its seal famously mashed together the swastika and the ankh as well as the ouroboros and a hexagram formed of interlinked white and black triangles. The latter recurs frequently in Klint’s paintings. Hilma Af Klint was tapping into something much deeper with her work. The world's obsession with secret signs and symbols in a lot of ways has brought a sense of mystery and order to life which itself can seem dispiriting and beyond any one persons control.

The Klint Museum's branding was meant to evoke the feeling of occult symbols without subscribing to any in particular. Other influences were Austrian artists such as Josef Hoffman and Koloman Moser whose work was filled with hypnotic patterns. Patterns and Symmetry exist in every religious building on the planet. There are many scientific studies on the effects of patterns bringing calmness and order to viewers. This is one of the reasons why I wanted to create a merger of both pattern and abstract Occult symbology. The combination of order and mystery with the ability of infinite variations seemed to be an appropritate direction for the Museum. The Museum's logo accomplished this by using a unique procedural generative software to create a virtually endless supply of symbols and patterns, each with their own logic. 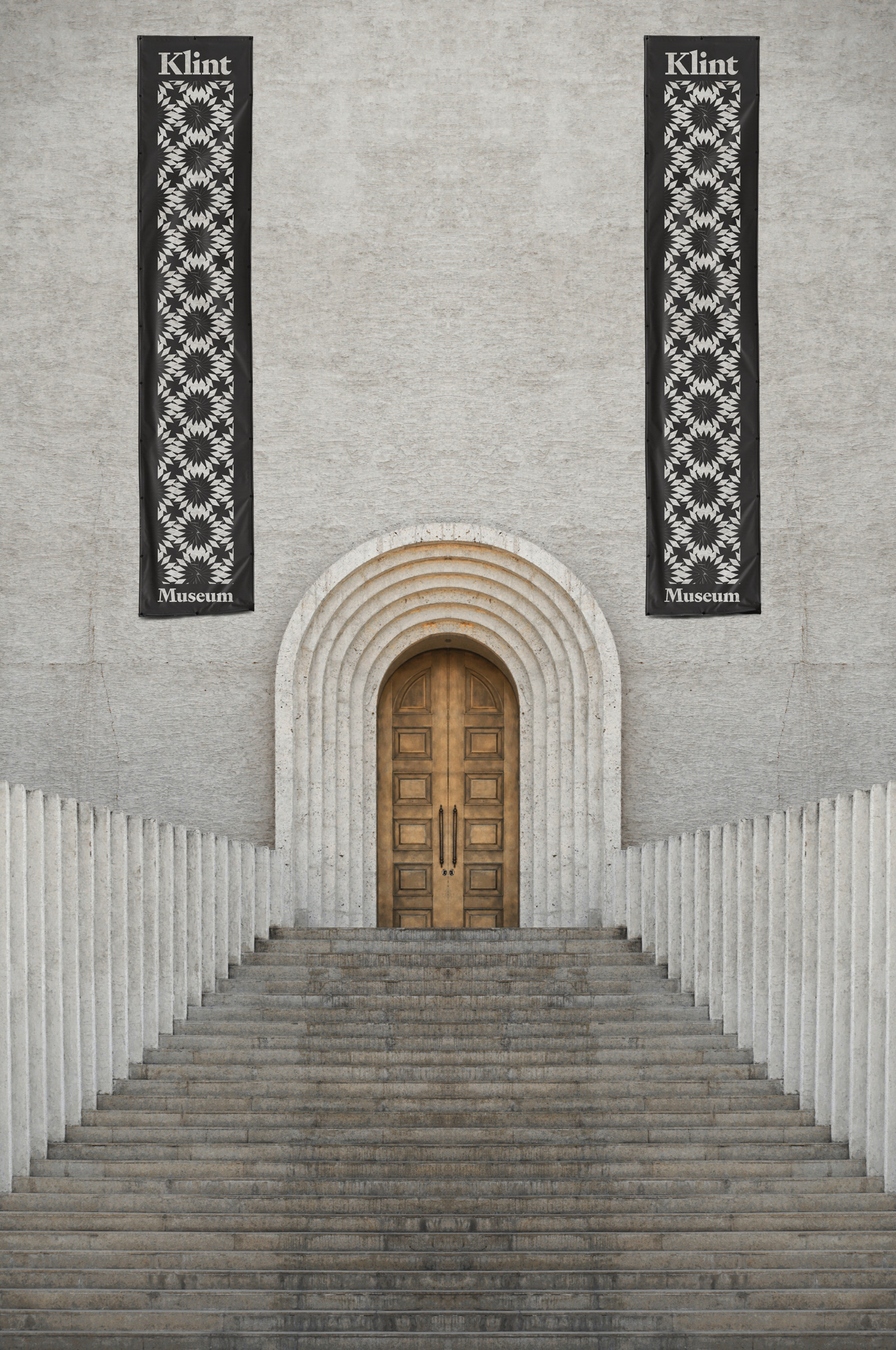 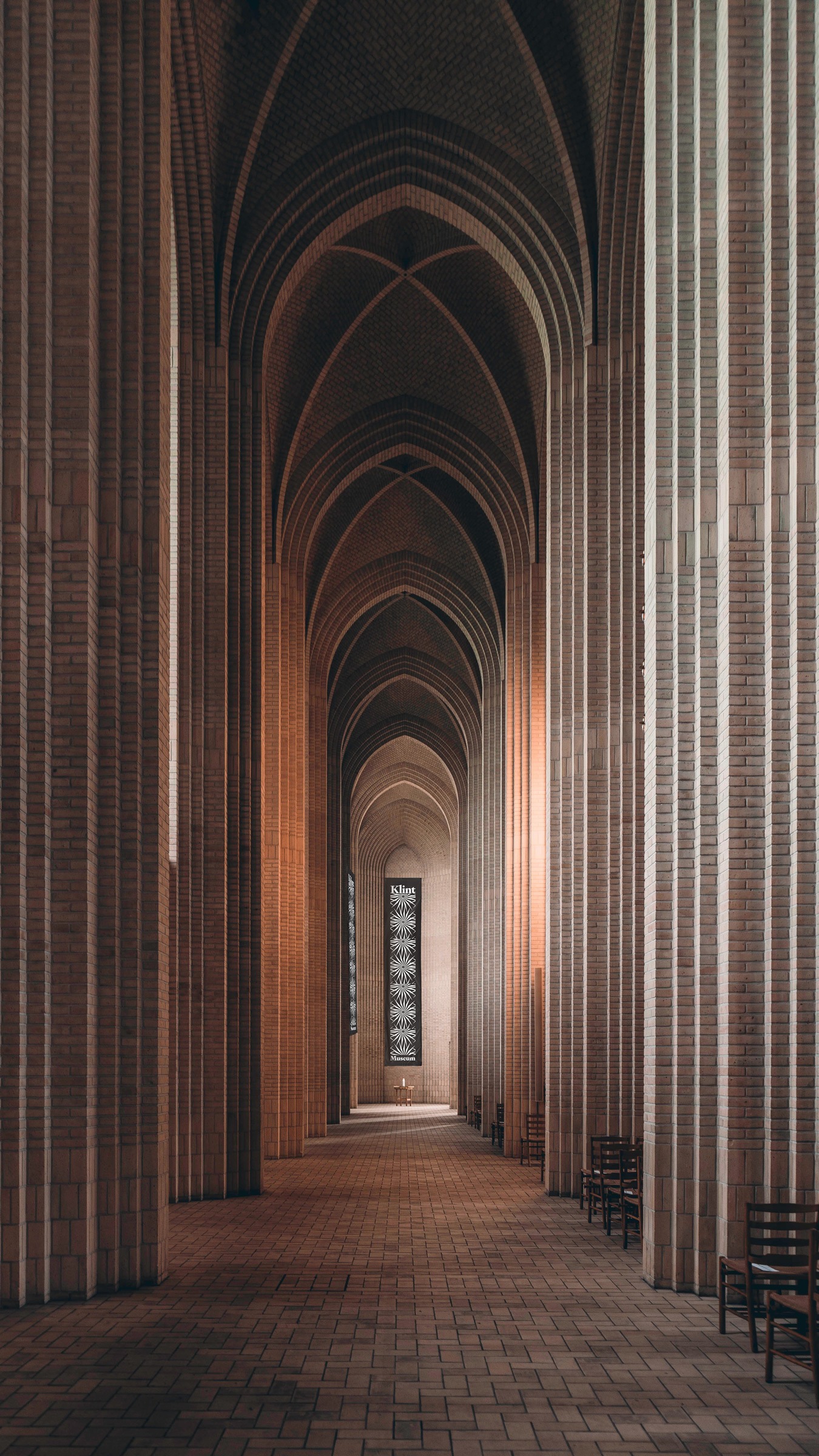 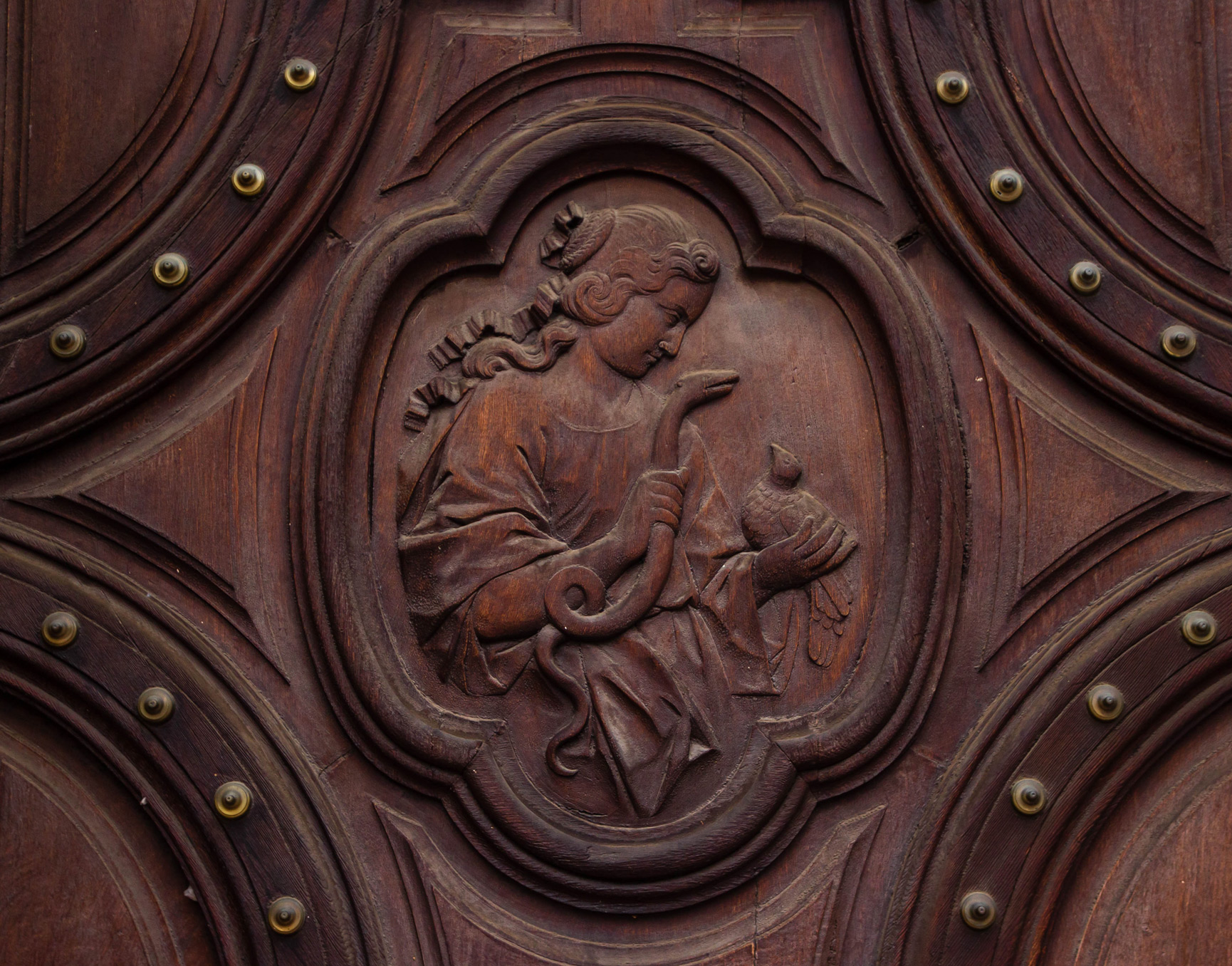 Monochromatic Branding
‍
One of the key features of Hilma's paintings is her striking use of color. Initially, I analyzed 100 of her paintings using machine learning to detect the most common colors for a semi unbiased decision. After I had my answer I used the top colors very sparingly below. The brand colors needed not to interfere with Hilma's own. This gave a bit more freedom for the design, one that would be able to change shape, reacting to ever-changing proportions. 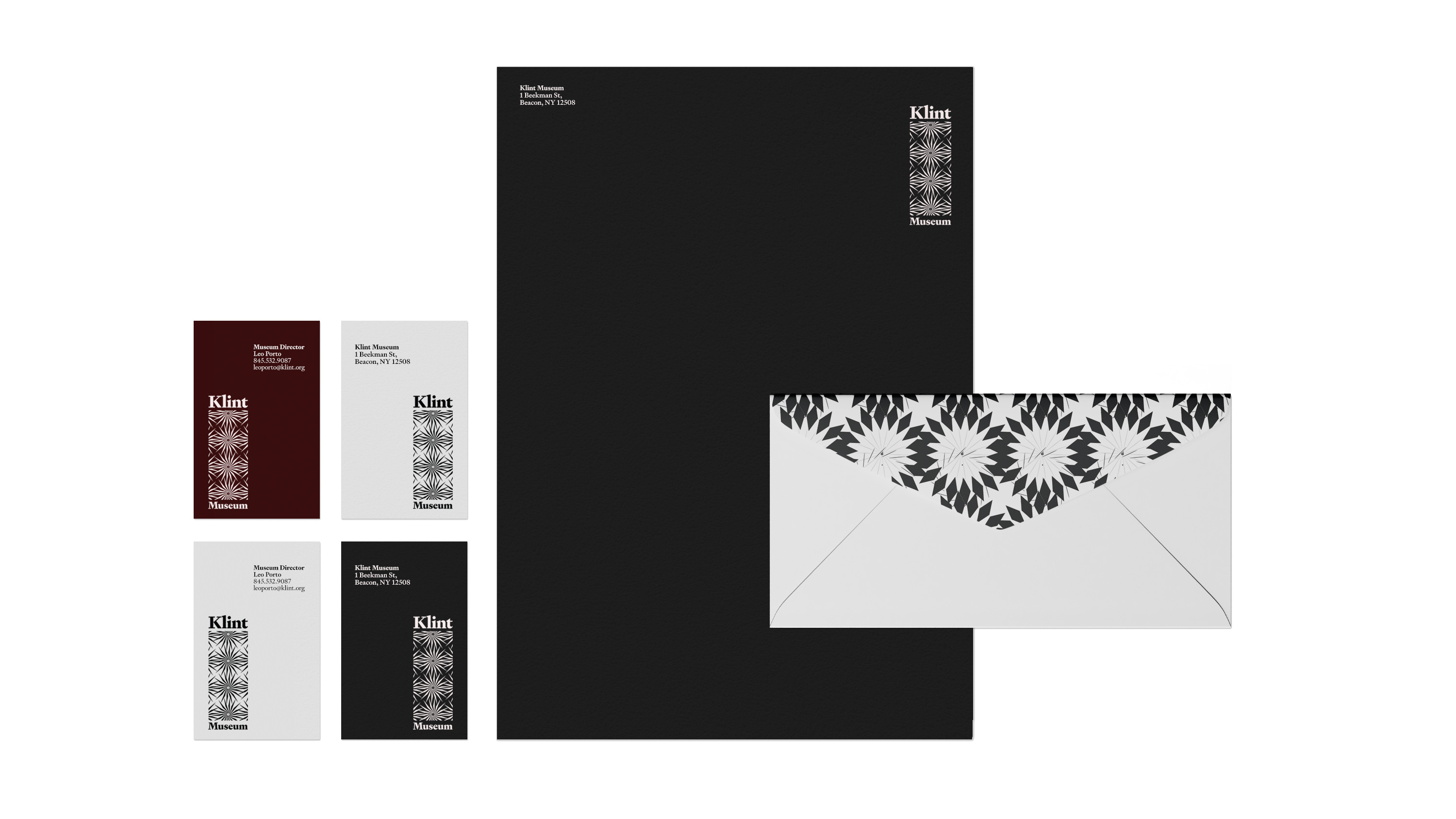 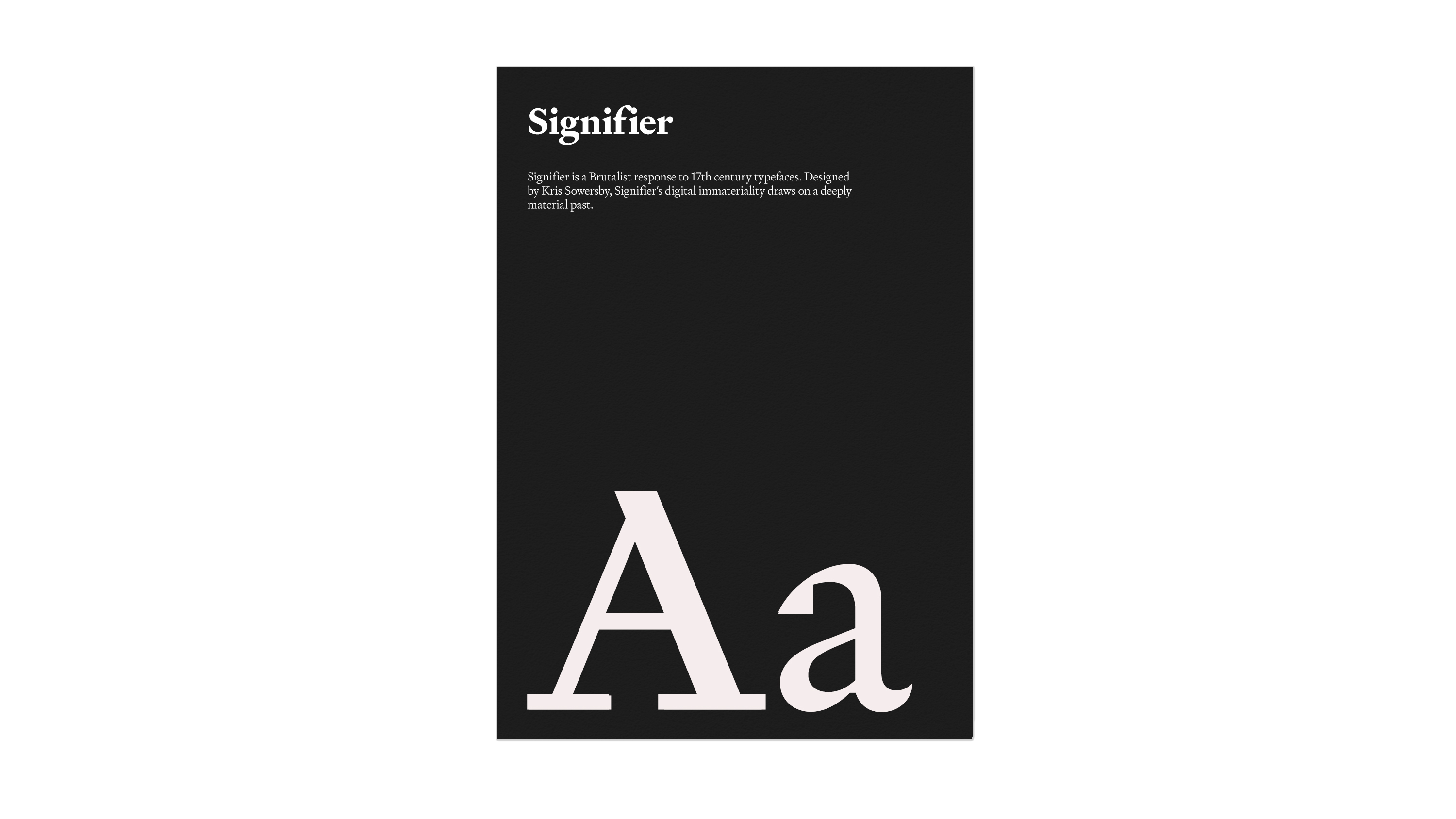 Procedural Automatic Drawings and Infinite Patterns.
‍
‍In psychology, “automatism” refers to involuntary actions and processes not under the control of the conscious mind. Automatic drawing can be described as “expressing the subconscious.” It's implied that one should draw randomly across the paper, without any rational thinking. There is no rational control at all.
‍
Klee is a software created specifically for the Klint Museum, named after Paul Klee, who was a frequent user of "automatic drawing." Klee is the mathematical equivalent of "automatic drawings." The software is used to create an almost infinite amount of procedurally generated patterns. Each pattern has its logic which can be set up in the UI. Once the desired inputs are checked off the system will create the work for you. Patterns for use cases such as large outdoor banners can use the outdoor function, producing bolder, large-scale patterns. Directional patterns can also be created for museum wayfinding.

There are multiple inputs within the UI, such as wayfinding, printed collateral, and outdoor advertising. Wayfinding patterns consist of easy-to-understand directional geometric shapes. The patterns for outdoor use are bolder and used to lead the eye down towards "Museum". For printed collatoral, patterns which the eye reads slower are used. The patterns are always changing, always evolving. The logo can morph, contract, and change proportions endlessly when needed.
‍

Directional Wayfinding.
‍
Simple geometry is utilized. The direction of the triangles is of utmost importance. When used together to point in a singular direction the design can direct museum visitors to their end goal. A secondary triangle is placed to the left of the word to solidify the direction that needs to be taken. 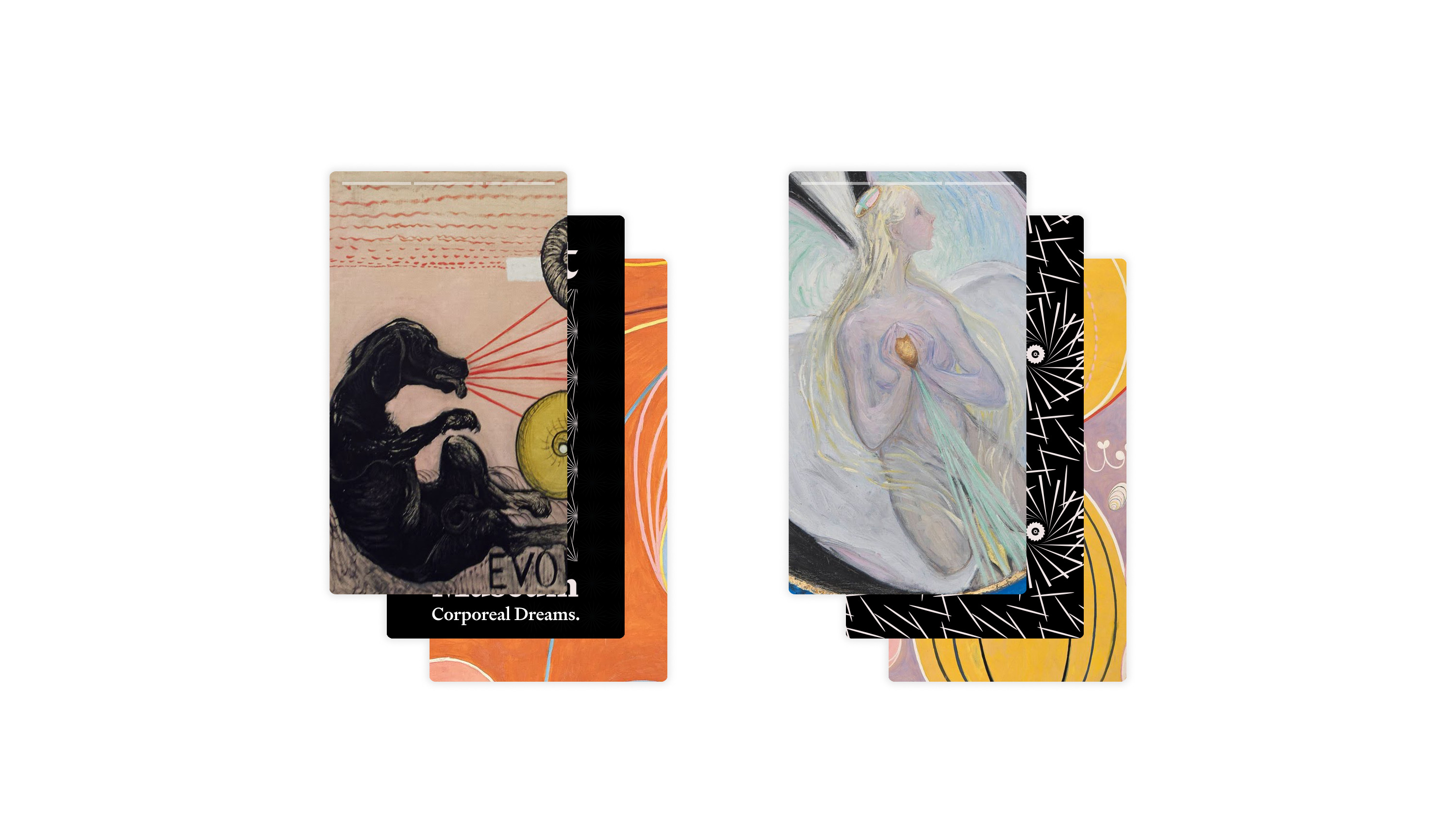 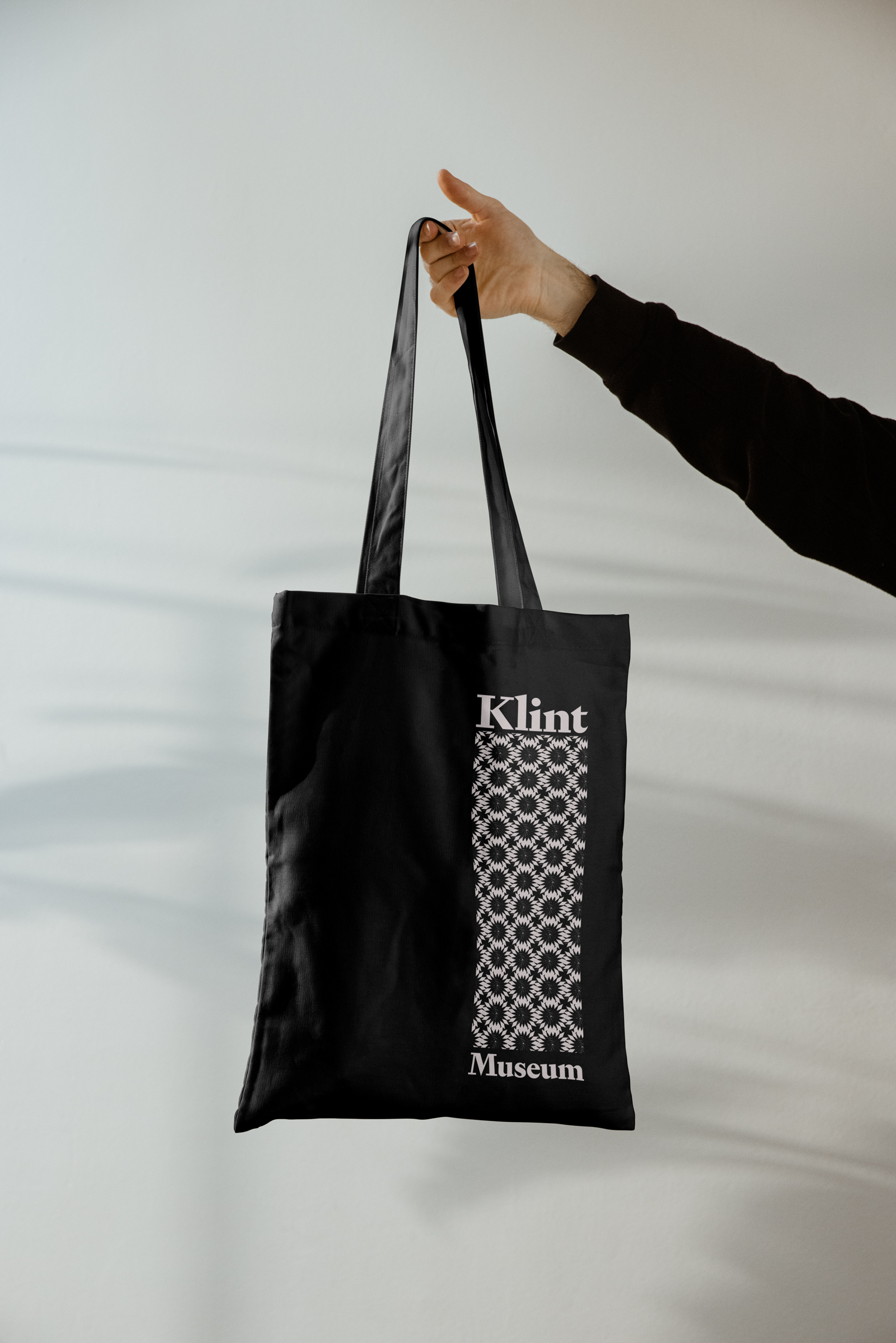 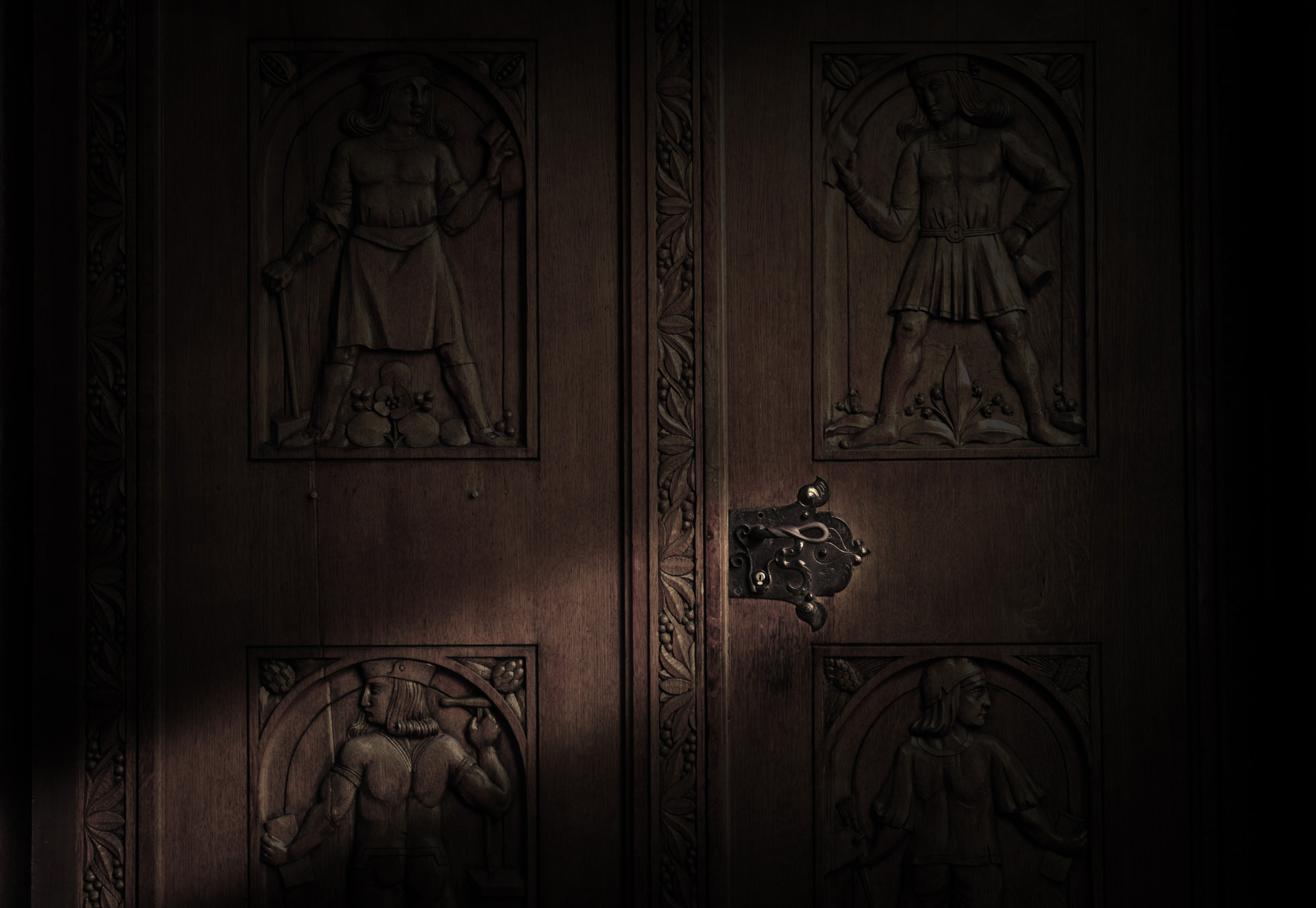 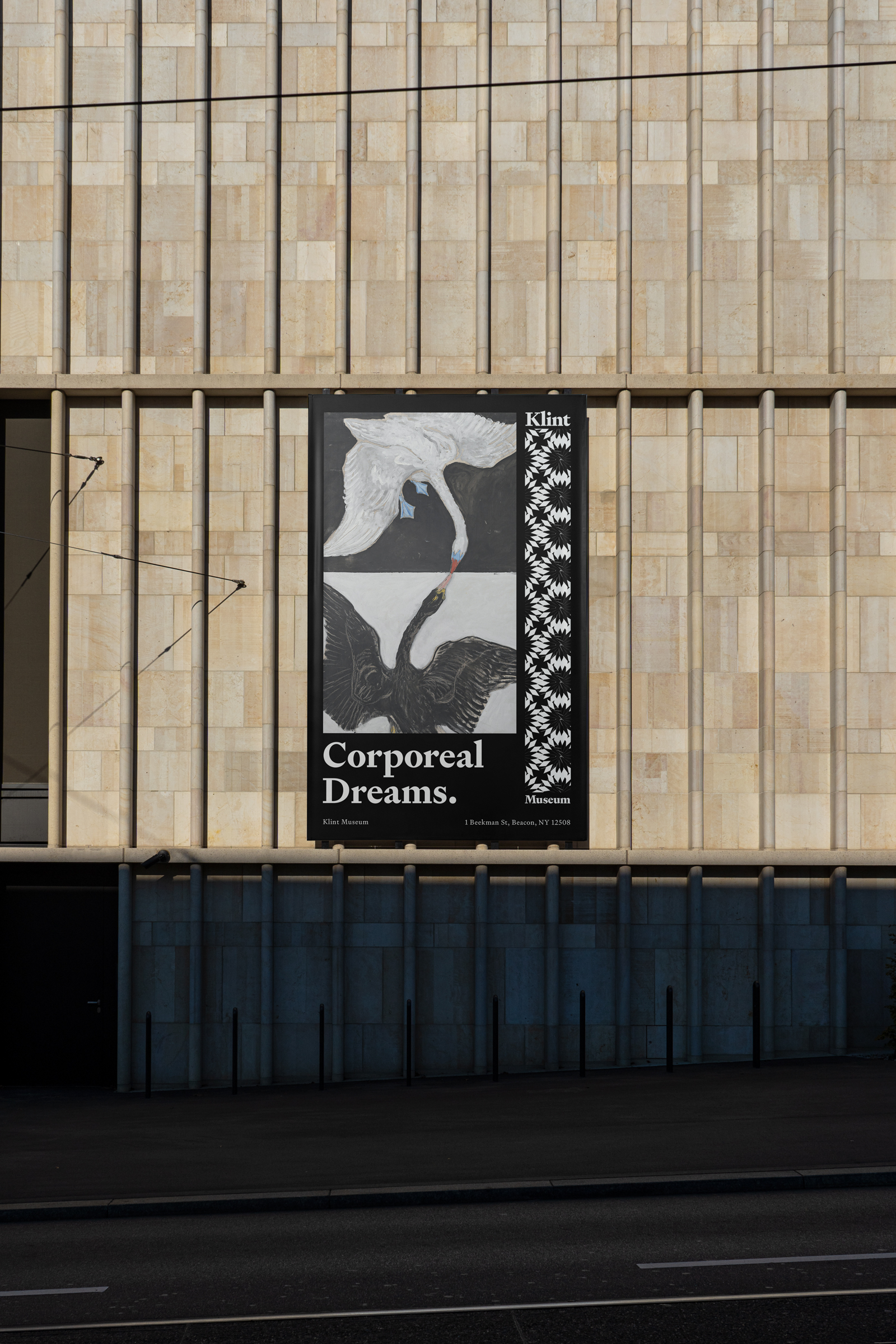 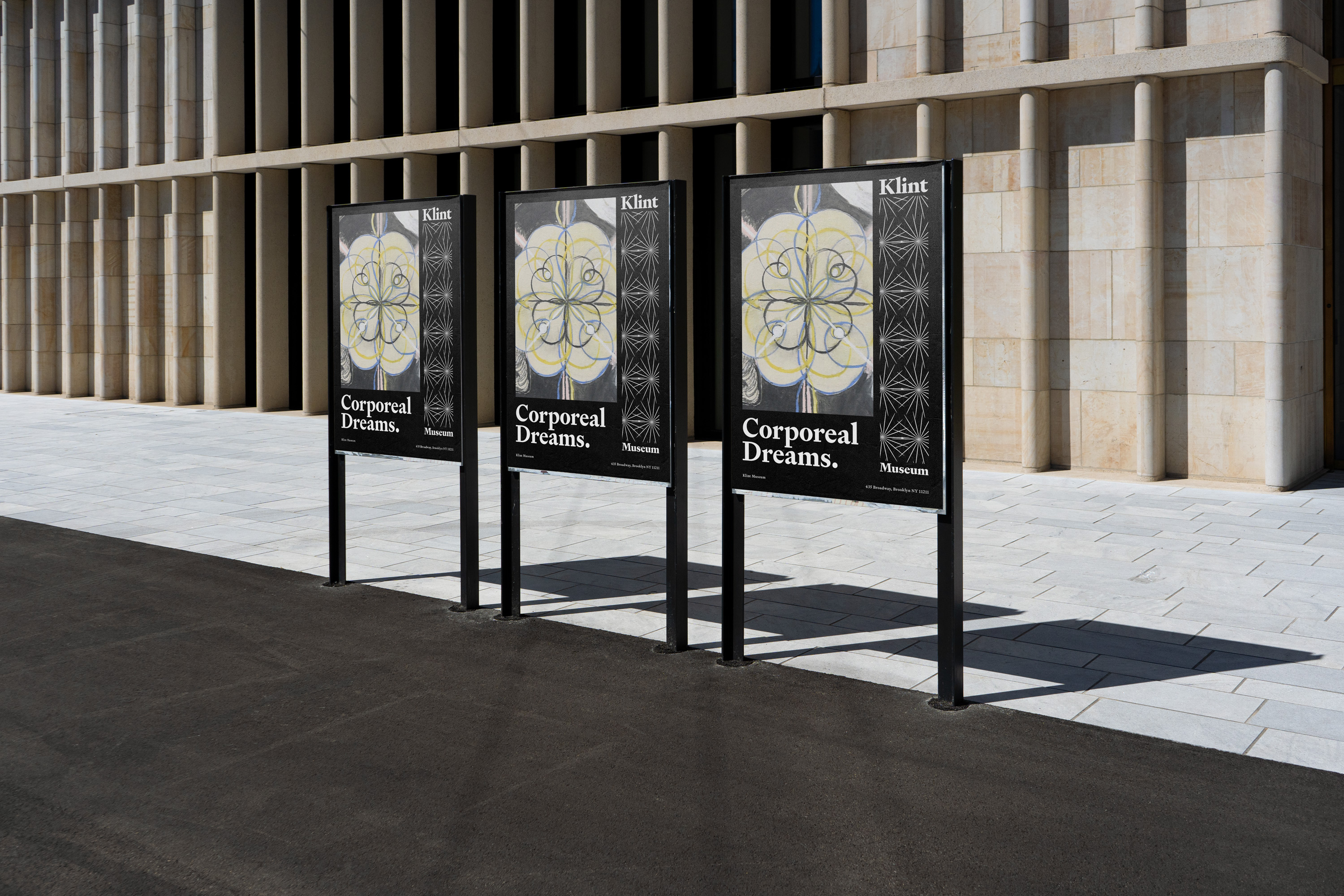